In and Around Benitachell

The Municipality and the History of its Territory

Benitachell is a town of a few thousand inhabitants in the Valencian Community, one of Spain’s autonomous regions. Just south of the regional capital city of Valencia lie unspoiled beaches in towns like Gandía and Oliva. Within the Comunidad Valenciana, there are three provinces, of which Alicante is the southernmost, and home to the municipality of Benitachell.

In the old days, territories, with their inhabitants, were often under the rule of a powerful person. Historically, Benitachell was in the area that belonged to the Marquis/Marchioness of Denia, which was one of the most important noble titles in Spain. In the 19th century, however, Spain underwent a geographical division into provinces. And so in 1833, the province of Alicante was formed, grouping areas of land that were formerly part of Murcia and Valencia.

The city of Alicante is much older than the province, since it was founded in 325 BC by Phoenicians who sailed from the opposite coasts of the Mediterranean sea. They named their new city Acra-Leuca (which means white summit), after the 200 metre tall hill above the harbour. Half a century later, the Phoenician town was captured by the Romans, who changed its name to Lucentum. A couple of centuries later, the city’s name was changed to al-Akant, when the city fell under Moorish control, along with much of the Iberian peninsula (lasting from the year 718 to 1249). After that and to this day, it was ruled by Spanish kingdoms, and the name, as you can guess, has only changed in its spelling. In fact, in Valencian language, the name is Alacant.

Alicante province is divided into nine counties (comarcas), including Marina Alta, where Benitachell is situated. The terrain of Marina Alta has a complex range of physical features: mountains, valleys, cliffs, and a roughed coastline of capes and bays. This variety is what makes Benitachell such an interesting place, loved by cyclists, hikers, scuba divers, and people who admire beautiful natural landscapes and tranquillity. The diverse scenery is symbolically represented in Benitachell’s official coat of arms. This emblem has a jewelled crown above a shield, in which you see stars and stripes, fleur-de-lis and six silver houses.

Puig de la Llorença is the highest peak in the 12.5 km2 (under 8 square miles) area of Benitachell. The town may not be very large, but it has a number of partidas, districts such as La Font, Abiar, Cumbre del Sol, Lluca and the wonderfully situated Calistros, where Flamingo Hills is, close enough to the town centre for convenience, and far enough to feel surrounded by the peaceful murmur of nature.

The distinct orography of the Alicante province is able to give produce of such quality that many Denominación de origen labels exist. Among the best of regional products are nispero fruits from Callosa, grapes from Vinalopó, almond turrón from Jijona (Xixona) and Alicante, figs from Albatera, potatoes from Jijona, pomegranates from Elche and a variety of wines, liqueurs, muscatel wines (try a mistela with ice) from Jalón (Xaló) among other towns. The origin of some of these wines owes to local architecture. A riurau is an extended arched building peculiar to the Marina Alta, developed to dry grapes for preservation as raisins or to make local sweet wines. Some riuraus that fell into disuse are being maintained as heritage sites, since they are such original pieces of local agricultural history. Benitachell has a few riuraus, as do other towns in the county like Calpe, Jávea and Denia.

Denia is the capital city of the Marina Alta county. A popular yachting destination, Denia is not short of tapas bars and excellent restaurants. It is also the point of departure for the ferrys to Ibiza and Mallorca. Inland from Denia lie the roughed landscapes characteristic of this part of Spain, the rolling hills of Jalón valley are a blanket of vineyards. Denia is also the beginning of the 150 kilometre stretch of coastline popularly known as Costa Blanca, that runs all the way to Torrevieja, passing through some of the most famous tourist destinations in the world. Indeed, about 20 minutes south of Benitachell, you will come to the next county, Marina Baja (Baixa), home to three well-known names: Altea, Benidorm and Villajoyosa.

The Costa Blanca is rightly famous for its beaches, but it is also well respected for its local cuisine. Regional cuisines were declared a World Heritage by UNESCO (United Nations Educational, Scientific, Cultural Organization) in 2001. Like so many places in Alicante province, Benitachell was traditionally an agricultural and fishing municipality. The Costa Blanca has a culinary heritage of over two thousand local recipes. Some of these dishes have a very defined origin, others combine ingredients from the coast and from inland crops. Certainly, seasonal vegetables and the local olive oil produced inland make delicious food even healthier.

In the sixteenth century, the predominant product of Valencian agriculture was wheat. Millet and sorghum were other common cereals cultivated in the region until the 17th century. Wine and bread were elementary products of the Valencian diet of that time. Rice was a minor cereal, but highly profitable. In certain areas capable of supplying this crop with water, its production became viable, especially in the Orihuela orchard, the banks of the Júcar and the Túria rivers, the orchards of Valencia, Játiva or Plana de Castellón. Although rice cultivation was associated with malaria, paddy fields increased in the 16th century, and luckily for paella lovers, rice has not fallen out of fashion like millet and sorghum did. Another food that has not lost its appeal is chocolate. Since chocolate arrived in Spain in 1502, it has become a part of Spanish culinary traditions, as a visit to the town of Villajoyosa (literally, ‘the joyful village’) and its chocolate factory Valor will show. Local specialities that date back to prehistoric times include gazpachos, cocas and minxos, proof that the gastronomical heritage of the counties around Benitachell is very up to date. In the XXI century, the province of Alicante has received a number of prizes, awards and mentions for its chefs and restaurants or chefs. These include, near Benitachell, restaurant Girasol in Moraira, and restaurant El Poblet in Dénia.

Valencian regional cuisine has a whole family of recipes for ‘mojetes’, healthy appetisers of juicily cooked vegetables, flaked fish and olive oil that are eaten with chunks of bread. Marina Alta, Marina Baja and the counties of L’Alcoiá and el Comtat are where gourmets and food historians like to enjoy the rich variety of savoury dishes and light, summer meals that include Salazones. This technique of preserving fish or fresh produce in salt has a history of over 2500 years. Salted fish is often used in recipes for pericanes, borretes and espencats. These traditional foods are made with some variety of salted tuna: melva, bonito or bacoreta. Some use cod or octopus. The borreta is typical from the Costa Blanca, and includes some type of cured fish such as sangatxo (cured tuna). Inland villages make the borra version, with cod and spinach. Espencat & esgarraet, from the verbs ‘espencar’ and ‘esgarrar’, meaning to pull into sections or pull apart. These dishes are characterised because the raw ingredients are chopped vertically or torn into chunks. The pericana, from Alcoy and surrounding towns, is a simmered or baked combination of dried peppers, garlic and cod flakes drizzled in olive oil. The pebrereta is another type of ‘mullador’ (mojete), a juicy dish conceive to dip bread into. It can be made with an array of vegetables: peppers, pumpkin, onion, aubergine, courgette, tomato, dried red peppers, or cauliflower depending on the season.

If these are some of the appetisers, imagine the rest of the meal! We hope you enjoy your stay in Benitachell. It won’t be hard…
You can find information about other municipalities in Alicante here: https://www.diputacionalicante.es/los-municipios/ 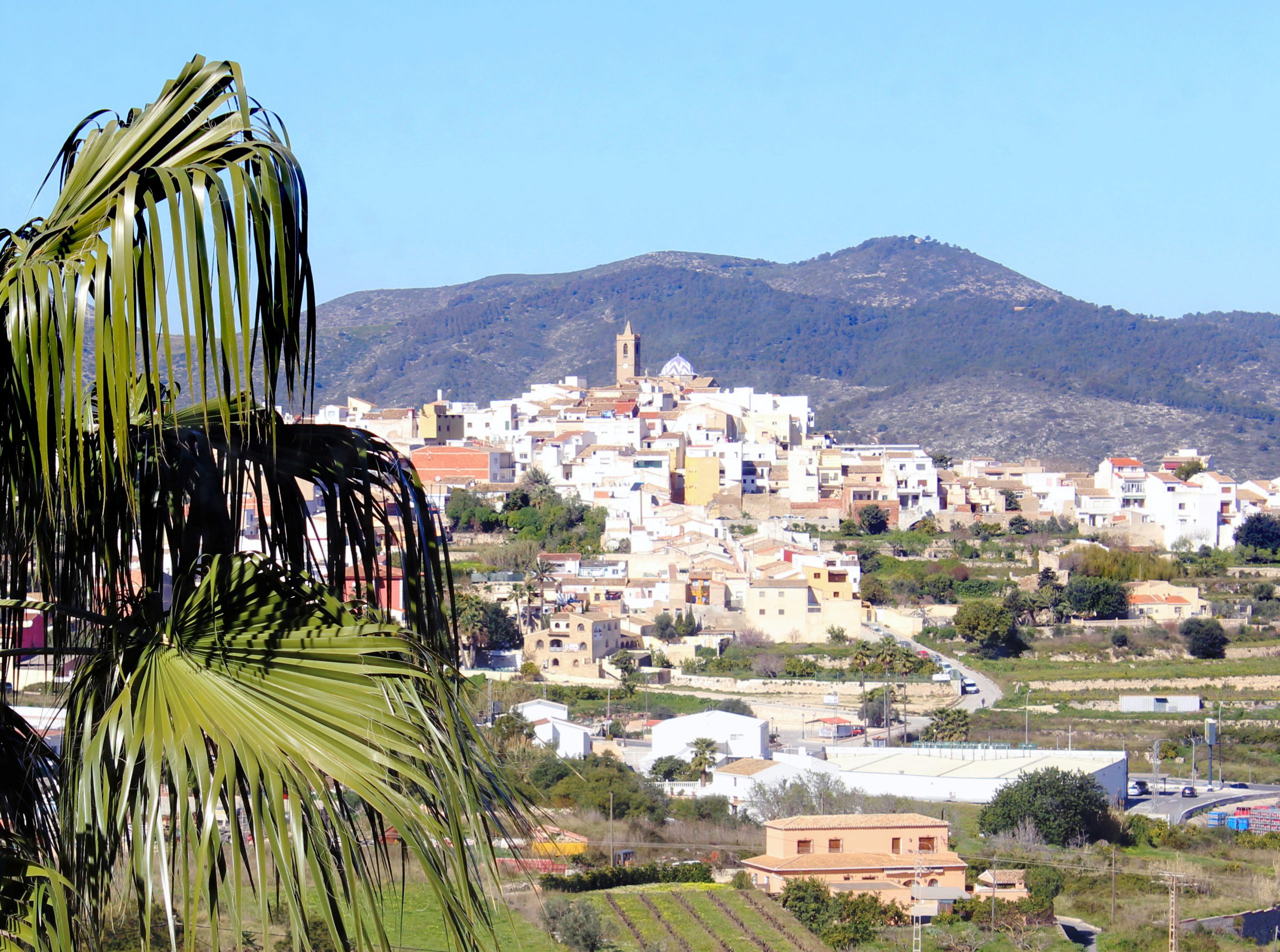 Since the Palaeolithic there have been settlers in this locality. Already in antiquity they appreciated the fertile lands, the underground waters and elevations from where to control the territory and admire its beauty. There are archaeological remains from the Bronze Age and the Iberian period. Wine was produced here during the Roman Empire, and the Arab culture records the village name as Benitagell. The five stars of the current coat of arms of Benitachell (spelt Benitatxell in Valencian language) indicate that it belonged to the Marquis of Denia until the end of the 17th century, when the destroyed old town is distinguished from the new part, known since then as the New Town of Benitachell (Poble Nou de Benitachell). Also during the 17th century, Christian communities arrived from the Balearic Islands and Catalonia. The Church of Santa María Magdalena dates from 1710, and the remodeled building still crowns the highest part of the village, as is seen in nearby towns such as Altea.

One of the most beautiful coves in the area is only 5 minutes away from Flamingo Hills. It has amenities such as a bar, loungers and parasols, lifeguard staff, an infirmary, parking area, protection beacons, access for the disabled, and toilets. The waters of this cove are great for snorkelling and scuba diving and the beach is surrounded by hiking routes of all levels. By the beach and accessible on foot, the Moraig cave is an unmissable sight. This spot is fabulous to relax and enjoy nature.

Surrounded by cliffs, this little stony beach is an idyllic spot within reach of intrepid people. Access to this cove is across the trail called "Ruta dels Testos". You’ll be rewarded with some of the most scenic views on the Costa Blanca. Enveloped by tranquility, the transparent waters are perfect for bathing and diving.

The beautiful Llebeig cove is located right between Benitachell and Moraira. Access is on foot, through a path known as the "Cliff Route". The cove is surrounded by little houses that, a long time ago, gave refuge to fishermen and to the guards on the lookout for smugglers. Spotthe cane structures hanging from the cliffs? They are peculiar fishing contraptions that were builtin the old days. Nowadays Llebeig is the perfect place to avoid crowds of tourists and forget the hustle and bustle.

Moraira is the closest town to Benitachell and is a 10 minute drive from Flamingo Hills. Moraira is a small fishing village where visitors can find shops, sandy beaches and a host of restaurants to try the best Mediterranean cuisine lovingly made with fresh produce. The seaside tower is a reminder that the ancient villagers were at risk of pirate attacks. Moraira is a great place to share a paella by the sea.

A spectacular succession of cliffs and coves with small pebble and pebble beaches border the Costa Blanca between the towns of Denia and Jávea (Xàbia). The limestone massif crowned by the Montgó summit is a Natural park of the Valencian Community. The 7,500 hectares of rugged nature protect geo-ecological connectivity. A choice of different routes up the 750 metres of the Montgó mountain let you plan excursions across the massif, gazing at vast stretches of fields, rocky landscapes, pine forests and wilderness. From the peak it is possible to see the island of Ibiza.